At this writing (August 11), we have been in Dharapaani less than a week but it feels a lot longer.  The transition has been far smoother than we could have hoped, largely because mit, the family, and neighbors have been incredibly welcoming and generous.  We will have much more to say about them in future posts.


Most of our time so far has been spent setting up house and establishing a daily routine.  Our house has two rooms – one up, one down – each 8’ by 14’.  We have laid linoleum on the ground floor, hung curtains, and are slowly turning it into a home.  A day-long shopping expedition to Dumre Bazaar to the south provided us with pots, pans and other household basics.
We have had less than a day of power since we came, one result being that the carpenter making our furniture has been unable to work.  We are still living out of shipping crates and since we brought waaaaaaay too much stuff we feel like we are living in a jumble sale. 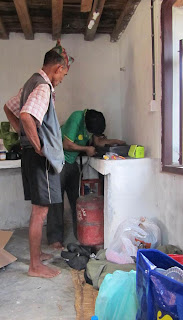 Once we had cooking gas installed, we were able to start cooking for ourselves, much to the relief of daughter-in-law Mira.  Mira and her daughter Sumana, as well as mit, live in the house with us.  Everyone respects our space (more or less), but the household population density is higher than we are used to.


Our teaching schedule is becoming clearer – three days of English in Saano Dumre, one day teaching computer science in Thantipokhari (a 1.5 hour walk down the hill) and perhaps one day teaching something in Ampipal (an hour walk up the hill).  Next month, when the monsoon clears and the roads dry out, we will explore opportunities in Jaubari, about 6 hours to the north.  The idea of getting a motorbike is becoming more appealing.


The most amazing experience so far has been the welcome given us by the Saano Dumre school.  We showed up for what we thought was a school committee meeting, but when we rounded the corner there were two lines of a hundred students and teachers.  As we walked between them, we were festooned with garlands and showered with flowers.  Local dignitaries gave welcoming speeches and in return Harvey gave an impromptu speech of thanks in Nepali, which was then retranslated into Nepali for the benefit of the bewildered school kids. 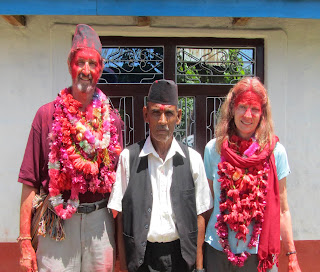 This was followed by teachers and people from Harvey’s past placing welcoming tikas of vermillion powder on our foreheads, a process that went from respectful daubs to enthusiastic smears to willy-nilly dumping of powder over our heads.  Harvey’s favorite moment came when his cook from the old days, now an old woman, ground fistfuls of powder in his hair, shouting “Who was your mother!  Who was your mother!”  It was all very overwhelming and quite wonderful.


We do have internet access after all, thanks to a something called a USB data stick that provides wireless 3G service.  We were warned in Kathmandu that it would not work in the hills, but it does, at the blinding speed of 50 kbps.  We welcome emails, but no attachments please.

Posted by Malinda and Harvey Blustain at 10:29 AM No comments: