With the visa drama behind us, we have settled into a daily routine. Our day begins at 6:00 with a variety of household chores.  Harvey sweeps the courtyard, makes tea for the family, and cooks breakfast. Malinda sweeps the house, cleans the outhouse, does the dishes, and mends the family's clothes. We both help the kids with their homework. 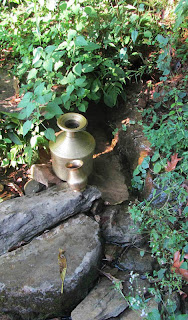 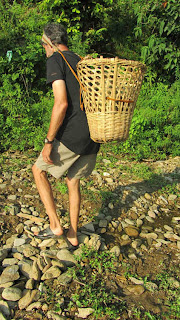 Getting drinking water is one of the highlights of our day. Household water flows from a stream into a tank near the house through a series of plastic pipes. For drinking water we walk a quarter mile to a spring where the water bubbles out of the mountain. It is pure and delicious and needs no treatment. People were initially amused that Harvey carries water, but it has earned him some cred.

Schools runs from 10:00 to 4:00, although we teach only until 1:00. Between various Hindu holidays and a two-week district-level exam period, we have not been in a classroom since mid-September and don't return until next week. With time on our hands, we have been trying to get traction on a number of projects. But Nepal is a place where things unfold at their own pace: walking one hour to see someone who is not at home; waiting all afternoon for someone who may or may not show up; walking 90 minutes to teach a computer class in Thantipokhari only to find there is no power; chatting with a shopkeeper for 20 minutes as a prelude to buying a bar of soap; spending 30 minutes tracking down why water is not flowing into the tank; before we know it, it is time to prepare dinner. Sometimes it takes an entire day for nothing to happen.

The days starts to wind down at 5:00 when we take our showers. The solar hot water system has exceeded our expectations and we still consider ourselves blessed to have a daily hot bath. After some initial hesitation, the family has also taken to the system in a big way and has found new uses for it. Who would have guessed that a shower is the perfect place to de-hair and gut goats? They do a reasonable job cleaning up so we just roll with it. 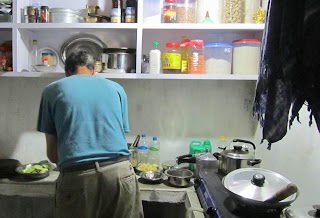 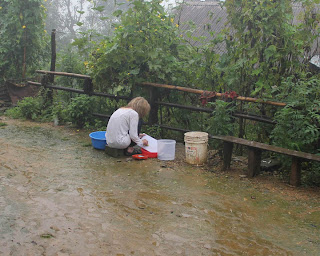 Harvey has taken over cooking duty and the family has finally declared his daalbhaat to be excellent. It is not hard to perfect a recipe when the menu is the same every day: rice, lentils, potatoes, and whatever form of squash is available that day. The menu will evolve as the seasons change. Malinda then washes the dishes, increasingly in the dark as the days get shorter.

After dinner we sit in front of the house chatting with the family. One evening we brought out a large world map, the first time some of the adults had seen one. Another time we gave a slide show of pictures we had taken of them. When we get a table we will start showing films. But most evening are spent just sitting and talking, a very pleasant way to wrap up the day. If we are up past 8:30 it is a late night.

A few weeks ago, while slogging our way to Thantipokhari in a monsoon downpour, Malinda commented, "We are having a wonderful experience here." Indeed we are.

The family is emerging from a spate of illnesses. Biraspati and her son Asim were in the hospital for a few days with typhoid, a Nepali term that covers a range of flu-like illnesses. Mit's back was especially bad for a while, the result of a fall from a tree last year. Around the same time, Asmita had her first period, which put her in seclusion for five days. We tried to help out as best as we could, but there is no escaping the fact that we are totally incompetent at the most basic tasks of running a Nepalese farm and household. 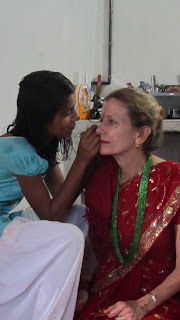 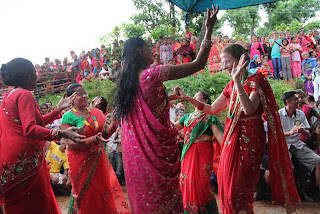 Hindus recently celebrated teej, a holiday in which women pray for the health and long life of their husbands. The women in our family made sure that Malinda was properly attired and adorned, including giving her red toe nails for the first time in her life. They also took her to a dance festival where she was dragged before an audience of hundreds to do a traditional Nepalese dance. That was two weeks ago and strangers are still coming up and making polite comments about her performance. Malinda wishes they'd all just drop it. 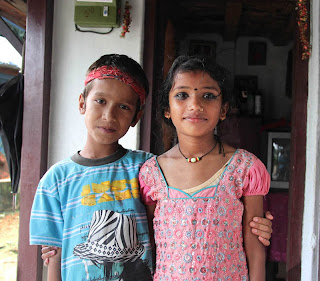 Believing in full cultural exchange, we have been teaching Asim and Sumana, two of our grandkids, the basics of 1960s music and dance. One evening, to the tune of Jumping Jack Flash, they strutted their stuff for the rest of the family. The adults were not terribly amused and were somewhat slack-jawed when Asim and Sumana did the bump (which they did very well - perhaps too well). So we have cooled it on the dance lessons for a while, although recently when the adults were gone we did a session to Michael Jackson's Bad. Our secret greeting now with Sumana is who's bad! The kids are absolutely delightful.

Our furniture has started dribbling in.  First to arrive was the shelving for the kitchen, which extends the entire 7' across the eastern wall. Unfortunately, the carpenter only measured from the floor and didn't realize the walls slope in as they go up. So he had to gouge out a lot of concrete on both sides in order to jam the shelves up to the ceiling. It kind of looks like hell, but it is what it is and we are just glad to have a place to put stuff. The shelves for the northern wall arrived as well, but they extended too far down, making it impossible to sit on the bench below. Sending it back has delayed things further, but Harvey got satisfaction from discovering that he knows multiple ways to say "I told you so" in Nepali.

We finally have a pet, but not what we had expected. We tried to befriend the two cats (Squeaky and Growly) associated with the house, but they just don't like people and feeding them would have undermined their value as mousers. Instead, an orphan chick named Peeps has adopted Malinda as her mother. Malinda used to keep chickens in her hippie farmer days, but this is the first time she has been on intimate terms with one. When the time comes, we will see how she does at eating Peeps.

We just returned from Jaubari, a day's travel to the northeast. There is a small government hospital there and like the hospital in Ampipal up the mountain from us there is a desperate need for medical doctors. If you know of anyone who wants to volunteer to spend time doing a tremendous service with wonderful people in a spectacular setting, please have them contact us at hblustain@gmail.com.

Posted by Malinda and Harvey Blustain at 5:31 AM