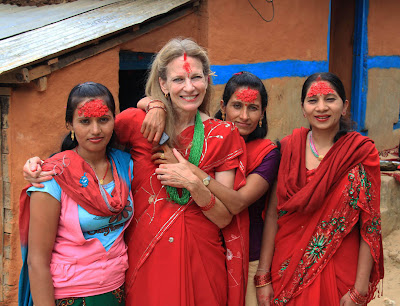 The past month has been taken up with festivals.  Desain, a two-week event at the end of October, is the most important in the Nepalese calendar.   A celebration of the warrior goddess Durga, it is the occasion for family rituals and reunions.  Our mit has seven children and 17 grandchildren and most of them (along with numerous in-laws and other extended kin) came to Dharapaani. 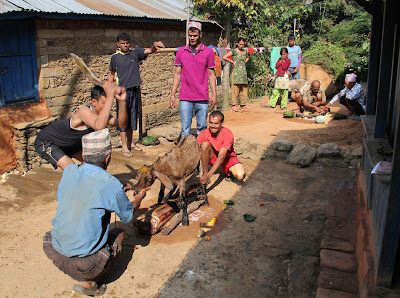 On the eighth day of Desain, each family sacrifices a goat.  Because of the large number of family, we did two.  Meat is eaten only occasionally, and the glut of goat meat added to the festive spirit. 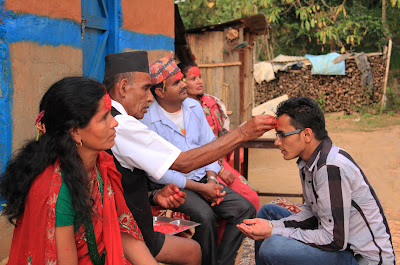 The tenth day of Desain is the most significant, when people receive tika from their senior male relative.  Mit being a patriarch of his extended family, a flood of people came for his blessing.  At times it seemed like we are related to half the population of Nepal.  One of the most pleasing moments was the exchange of tika between Harvey and mit, a reaffirmation of their relationship. 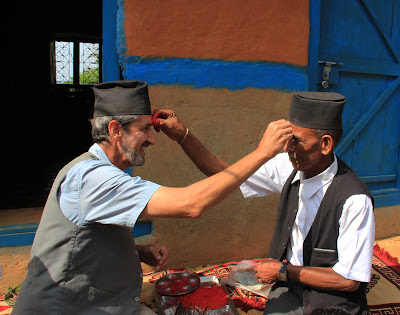 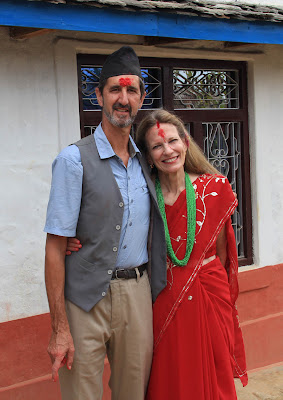 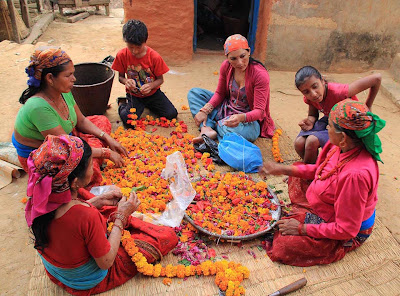 Last week, mit sponsored a Narayan puja (worship) in honor of his late wife.  Preparations took several days and included sprucing up the yard, making scores of flower garlands, the construction of a temple made from flowers, and cooking for the 200+ people who showed up for a night of worship, dancing, and revelry.  At 3:00 a.m. we set off for a temple two miles away, did puja, ate breakfast and then walked back, wrapping up at 10:00.  Fortunately, we did not have to teach that next day. 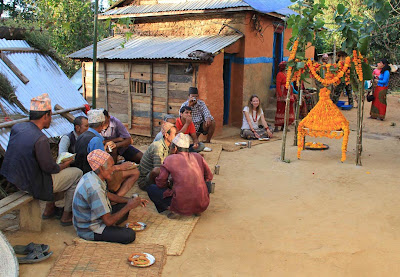 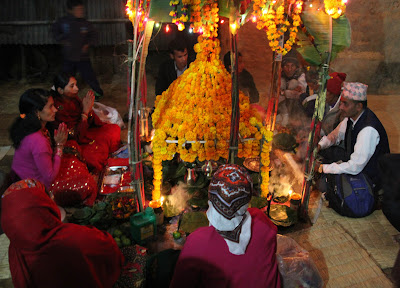 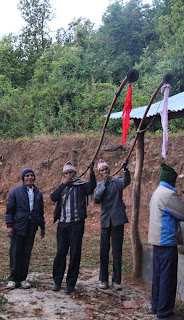 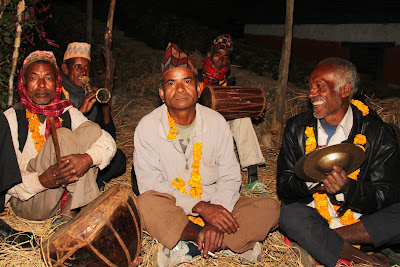 Members of the Damai caste provided the music and played for 12 hours with only intermittent breaks.

The other holiday we observed (sort of) was Halloween.  That afternoon we gave a talk and showed photos to the teachers in our school.  It was interesting that most of their discussion and questions focused on American beliefs about ghosts and witches, both of which are an active presence in village life here.  In the evening we taught the kids living around us to say “trick or treat” and handed out candy.  It was very modest as Halloweens go, but a nice reminder of home.

This coming week is the five-day Tihar festival.  Back in our anthropologist days, we would have looked forward to learning more about the ritual cycle, the social construction of meaning, blah blah blah.  Instead, we are taking off to Pokhara for a few days of R&R and being able to drink beer without people counting the number of empty bottles.

In other news:  The weather has turned markedly colder….  It is rice-cutting season, which means that school attendance is even spottier than usual.  We will have more to say about teaching in a future blog….  Peeps the chicken has passed on, dying of an ailment that had been going around the chicken community.  Malinda found it amazing that a chicken could be so responsive and smart. RIP Peeps….  Malinda is befriending two new kittens that live in our garden.  We hope to bring at least one of them indoors soon since the colder weather has brought an infestation of mice inside the house. 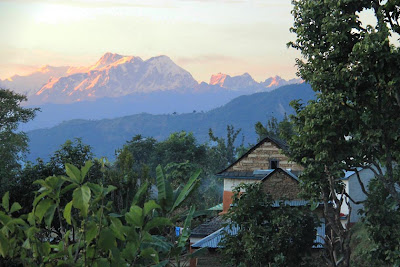 Our house (the white one), with part of the Annapurna range in the background.

Posted by Malinda and Harvey Blustain at 1:23 AM