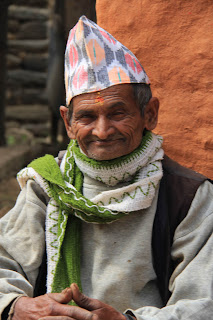 Dharapani lost one of its most prominent residents last week – not to death but through an old man’s decision (ill-considered in the minds of everyone else) to move to southern Nepal. 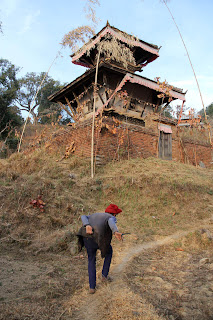 Baje Bahun (literally, “honorable Brahmin”) was a village institution. As the pujari at the community temple, he performed worship twice daily as required under the terms of the 200+-year-old royal endowment. Every morning and evening, the conch shell could be heard from inside the temple, signaling that Baje Bahun was at work. He also officiated at community rituals, although that role had diminished as he got older. More than that, he was a benevolent presence, an assurance that all was well in the spiritual realm.

Few people seem to know his real name; he was universally called maamaa (“mother’s brother”) a term of affection applied to non-relatives. His length of tenure as pujari is also a matter of debate; some say 40 years, some say 50, and most simply say “oooo, it’s been many years.” 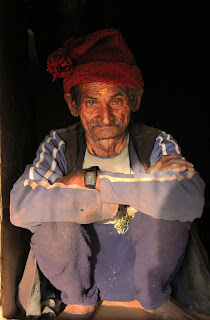 Maamaa variously gave his age as 75, 80 or 85. Like many Nepalis who manage to make it past 60, he was a tough old bird. Whatever the weather or temperature, he would take his early morning bath in the stream before doing puja. One time we were walking along the path and couldn’t figure out who was calling us – until we looked up and saw Baje Bahun high in a tree picking fruit. He spent long days cutting rice. He was bent over with arthritis, but he still traveled far and wide to visit friends. 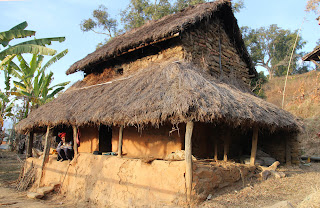 Baje Bahun lived in an ancient house right behind us, and several times a day he would amble into our yard and sit. He would often show up for morning tea. He was hard of hearing and his toothlessness made him difficult to understand, so our conversations were neither long nor deep. But he was always good company. He loved animals and children and was especially fond of Peeps, our orphaned chick. He was a gentle soul. 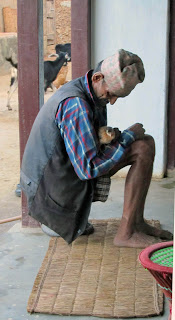 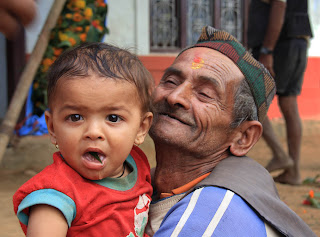 A month ago he spent a week in the local hospital – some sort of stomach ailment. When he came out, he announced that he was retiring and moving to Chitwan to live with his older sister. He has no children and no relatives in Dharapani, and he reasoned that he wants to spend his final days with family. The village argued that everyone here is his family and he will be well cared for until he dies. And what if his sister predeceases him? No argument could change his mind. Old men can be like that sometimes. 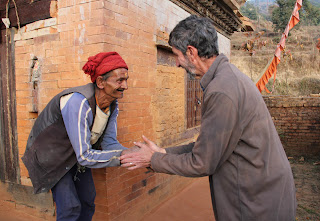 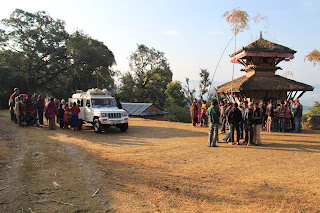 On the morning Baje Bahun left Dharapani, the village came to see him off. As he sat in the jeep, people gave him tika, pressed money into his hand, and urged him to change his mind. We gave him photos of his house and temple, the only visual reminders he will have of the village where he spent most of his life. Where he is going, no one will know that he was once the soul of his community. As everyone fussed over him, he tried unsuccessfully to maintain composure. At last, his meager belongings were loaded on top of the jeep and then he was gone. 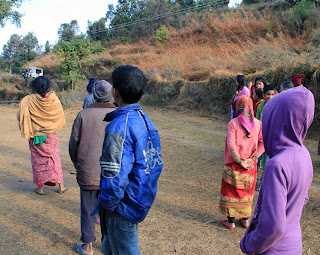 Posted by Malinda and Harvey Blustain at 4:44 AM