Stoves, Beatles, and a debt paid

The school year is over for us (the kids are now taking their district-level exams), so the start of our month-long “summer vacation” seems like a good time to catch up on miscellaneous activities. 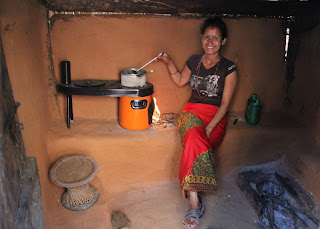 We have been privileged to be the distribution conduit for stoves provided by the Himalayan Stove Project (http://himalayanstoveproject.org), a non-profit that offers “clean” cook stoves to people in the region. Most cooking in Nepal is done over wood fires that use a lot of wood and create unhealthy smoke inside the home. The HSP stoves are specially designed to reduce wood consumption and smoke. Through the efforts of the Gorkha Foundation (http://gorkhafoundation.org/), we were given 30 stoves to distribute to local families. Major kudos and thanks to both organizations. (Please consider a donation to one or both.) 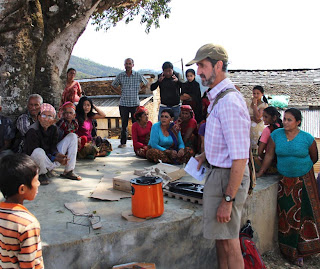 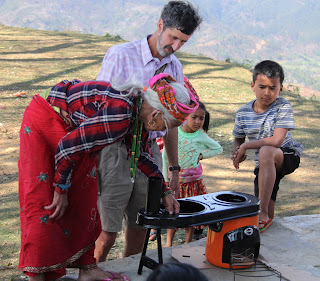 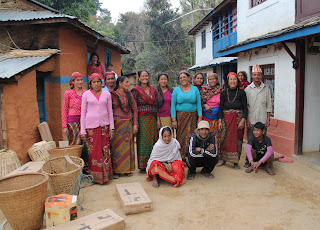 Not wanting the headache of deciding who would get the stoves (and more to the point, who wouldn’t) we enlisted the help of two community organizations. In Dumre, we gave 14 stoves to the local ban sumuha, or forestry association. For the past several decades, local communities across Nepal have been responsible for managing their own forest resources, one result being that the country has experienced significant reforestation. The Dumre samuha did a good job of choosing 14 families that reflected the multi-caste and ethnic variety of the village. The 500 rupees each family paid for the stove will go into a micro-loan program to enable farmers to purchase goats. 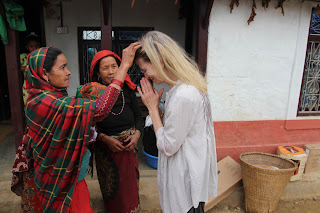 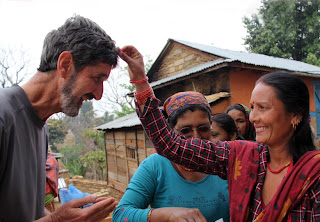 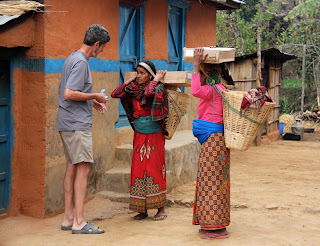 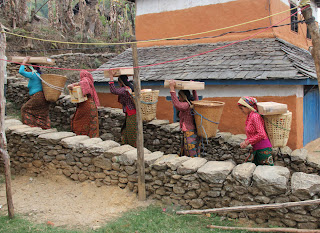 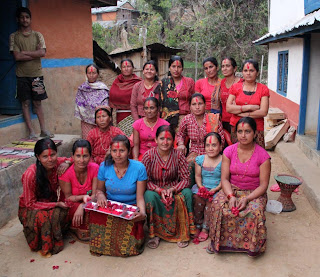 In Dharapani, our home village, we gave 16 stoves to the mahila samuha, or women’s association. The 8,000 rupees raised from the 16 recipients will go toward the organization's long-term goal of starting a rice mill in the village. We will do a survey of recipients in a month or so to see how they are doing with the stoves, but preliminary feedback shows that people love them. 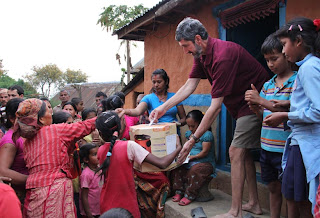 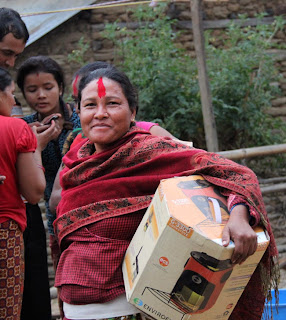 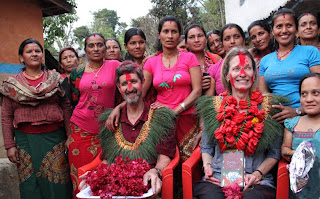 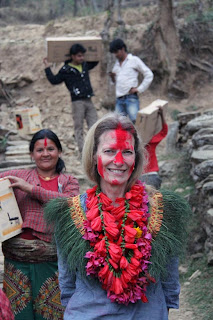 As the photos show, the gratitude we received far exceeded our modest contribution of paying to transport the stoves to the village and making sure they were distributed equitably. And so to be fair, as we were receiving the tikas and flowers, we cosmically redirected the blessings to the Himalayan Stove Project and the Gorkha Foundation. That said, it felt good to be able to do something for our community and we had a swell time doing it. 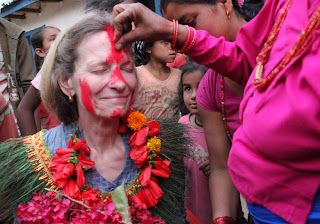 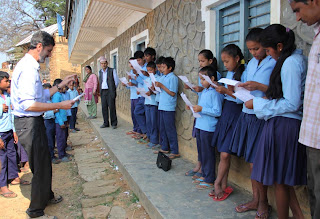 Our other recent contribution to Nepalese development was cultural: we introduced our special early-morning English class to the Beatles. They were especially taken with Hello, Goodbye (we think because they could understand all the words) and decided to perform it at the school's morning assembly. We practiced for several days and if we never hear that song again, it will be too soon. The morning of the performance, the kids were totally awesome. Next year, Malinda wants them to do a Michael Jackson number, complete with choreography. She'll be in charge of that one. 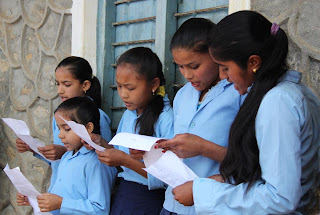 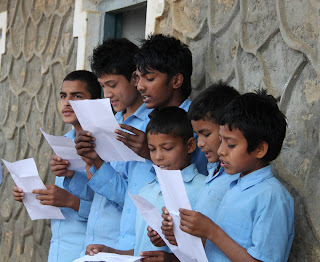 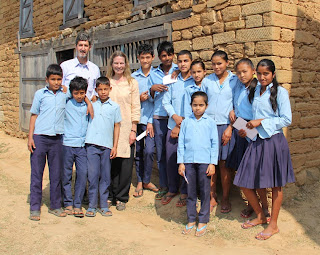 *****
Harvey is pleased to report that unfinished business from nearly 40 years ago has now been closed:

In 1974, after arriving in Dumre to do fieldwork, I allowed myself, with callow naiveté, to give small loans to people in the village. Most people repaid, but one, a budding Muslim friend I will call Abdul (not his real name), did not. Instead, he used the money to run away with another man's wife. It would be hard to overstate the dukha (pain, anguish, hardship, trouble) that episode caused me. Hindu-Muslim relations in the village at that time were especially fractious, and the loan was the cause of much yelling around and at me. For an earnest young ethnographer wanting nothing more than rapport with the natives, the incident was devastating, a low point in a stressful, lonely, and at times miserable 18 months of fieldwork. Things eventually settled down, and Abdul was never seen again….

… until 2010, when I arrived in Dumre, my first visit in 33 years. Abdul was there, and his first words to me were, “Do you recognize me?” Yes, indeed I did. And he was there again in 2011 when we paid another visit. And again last year when we moved to Dharapani.  Not a word was said about the loan…

…until last week when I reminded him about it. He insisted that the loan was repaid, his mother (now dead) having given the money to a friend of mine (also conveniently dead) to give to me. We reached an impasse and it would likely have stayed that way…

…until my mit got involved. My ritual friend is a respected man in the community and can be a force of nature. He is also Abdul’s uncle through fictive kinship, his older half-sister having been the mitini of Abdul’s mother. In such ways is a diverse and caste-stratified community integrated. Through a combination of argument and shame, mit got Adbul to pay up. Mit thoroughly enjoyed his role in this affair and proved once again that I had chosen my mit wisely. Ever the guardian of my interests, mit also cautioned me never to give loans to anyone, but added that if I did he would be happy to serve as my collection agency.

Recovering the money was, of course, never the issue. But seeing Abdul periodically in the village and knowing what grief he had caused me four decades ago continued to rankle. I always considered that Old Harvey owed it to Young Harvey to draw closure – a debt that has now been paid.

*****
At the end of this week, we travel up to Mustang, a semi-independent Tibetan kingdom allied with Nepal. A little finger that juts up into Tibet, Mustang lies on the other side of the Himalayas at about 4000 meters. Not having suffered the ravages of Chinese domination, Tibetan culture in Mustang is apparently relatively pristine – although we will see what a decade of tourism has done. The landscape of desert, canyons, cliffs, and moraine valleys is very different from what we are used to, and we look forward to seeing the northern slopes of Annapurna. We will get around by jeep, foot and horseback. We then return home in mid-April, refreshed and ready for another year of teaching and whatever modest adventures life in Dharapani may bring.

To all our Nepali family and friends: Happy new year!

Posted by Malinda and Harvey Blustain at 4:22 AM