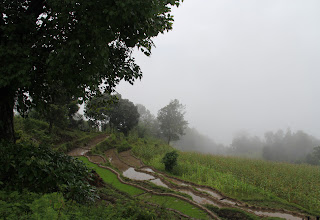 Next week we head to Gorkha and Kathmandu to renew our visas. This year we have a track record, so we tell ourselves that it should be easier this time. Or maybe not. We have been doing our daily Ganesh puja and encourage you to pray on our behalf to whatever deity you find most effective.

Next week also marks the beginning of a six-week school vacation. The monsoon has begun and all hands (but not ours) are needed to plant rice. Once the visa process is over, we will figure out what to do with all that time (or what’s left of it). We want to visit Lumbini (birthplace of Buddha), a wildlife preserve in far west Nepal, and perhaps Varanasi (Benares) in northern India. We are quite sure we will find something interesting to do.

As we head into vacation, this is a good opportunity to catch up on mundane and miscellaneous aspects of our lives here.
***** 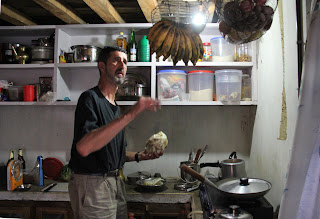 Life is Dharapani continues to be simple, uncluttered, and quite wonderful: up at 5:30, a leisurely morning, teaching from 9:00 to 1:00, and then afternoons reading, studying Nepali, doing chores, and waiting to see who or what turns up. Beers, baths, dinner and Kindles in bed round out the day. It is an unhurried and stress-free existence, and one that is blissfully free of the media, automobiles, and to-do lists. Considering that we spend all day, every day together for weeks at a time, it is amazing that we get on each other's nerves only sometimes. It helps that our house has two rooms, so we can spread out when we need to. 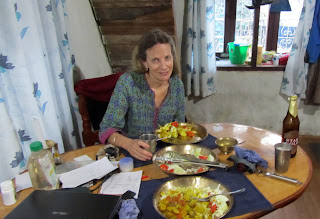 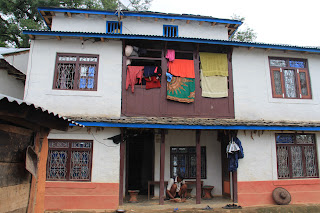 The house continues to be comfortable. We have made some improvements, such as screens on the door and upstairs windows, and are thinking about screens for downstairs as well. Otherwise we lack for nothing, except maybe more flat surfaces and more space for books. We have learned that we don't need much stuff and when we return to the States you are all invited to one hell of a yard sale.
*****

With the relocation of Mira, Sumana and Ashim to Kathmandu several months ago, we are adjusting to a smaller compound. 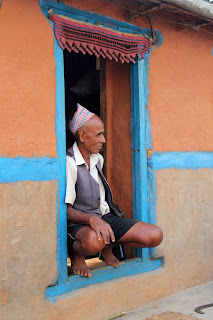 Ram Kanta Giri, Harvey’s mit, continues to amaze us with his range of skills, the latest being weaving rain hats from bamboo. As he often reminds us, his is the last generation that can make everything needed to run a house and farm from local materials. He complains a lot about his health, but he still manages to walk everywhere, fix everything, and wear down everyone else in the household. 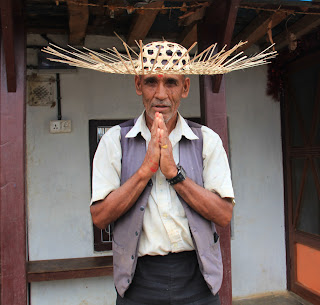 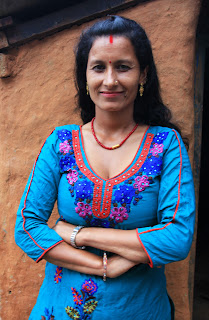 Daughter-in-law Brihaspati lives in the neighboring house. With Mira gone, we have had an opportunity to know her better and have come to rely on her for community news and gossip. She is also the world’s fastest talker and we will know we have achieved fluency in Nepali when we don’t have to say “Again?” after every other sentence. Her husband works in Saudi Arabia and we look forward to meeting him for the first time when he returns for Desain this fall. 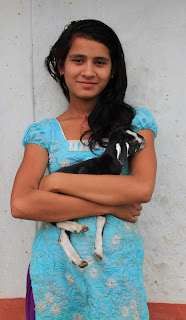 Fifteen-year-old Asmita, Brihaspati’s daughter, has had more responsibility thrust on her, and that has curbed some of her more excessive teenage behaviors. After school (she is second in her class), she hangs out in our house until chores call her away or she decides once again that we aren’t as interesting as she wishes we would be. We first met her as a little girl in 2010 and it has been an experience to see her grow up.

Our household has been enlarged by two cats. Tika and Seti were born last fall, but have only recently decided that they really, really like being domesticated. Cats are regarded here as useful for catching mice and little more, so our doting over them is a source of amusement to the family. That we bring back special cat food from Kathmandu strikes them as completely nuts – and counterproductive since it cuts down on their mousing. 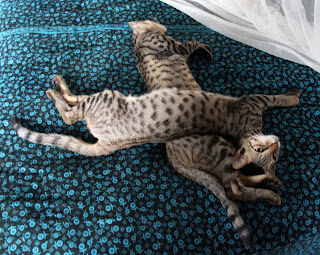 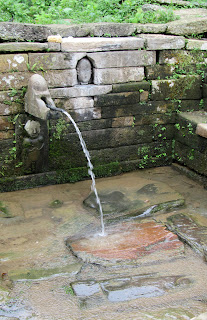 We have shifted the source of our water supply. The spring where we used to get water (we posted photos of it a while back) was dammed up and got muddy. So now we get water at the pandhero about 50 yards behind our house. It is closer than the spring, and has the additional advantage of being Dharapani’s social center. From dawn to dark there are people bathing, washing clothes, drawing water, and gossiping. One of these days we plan to camp out there for the entire day and just photograph the flow of the community. 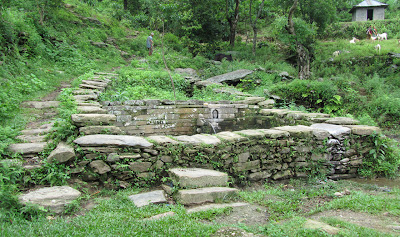 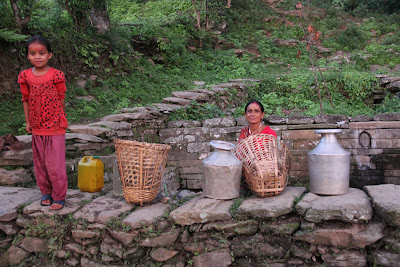 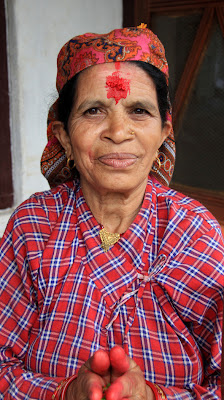 Malinda recently became mitini with Manu Maya, the woman who lives one house down the hill. Ritual friendship is not taken lightly here, so it took some time for Malinda to “pop the question.” There was also some question about whether they could become mitini. Manu Maya is married to Harvey’s mit’s younger brother. And because the two brothers married two sisters, Manu Maya is also the sister of Harvey’s mit’s late wife. This effectively makes Malinda and Manu Maya sisters and sisters-in-law, and according to custom relatives cannot become mitini. But the family Brahmin said it was okay given the circumstances, so the two exchanged tikas and flowers and now call each other mitini.


A few months ago, we wrote a blog on Baje Bahun, the pujari of the community temple who moved to Chitwan. A month ago, he came back to Dharapani for a week-long visit and seemed reluctant to leave; people here suspect that he regrets his decision to move away. And we heard just last week that his sister in Chitwan died. We are not sure what he will do now. 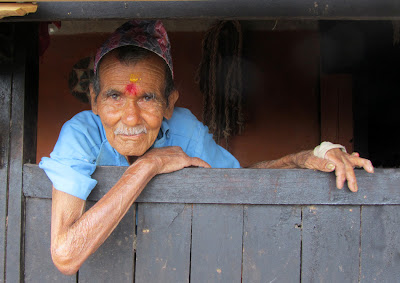 We can’t help but think of Baje Bahun’s self-imposed exile as we witness the long and lingering death of 86-year-old Kesar Giri (shown here at his grandson’s wedding in April). Cancer has eaten away his arms and legs and he is great pain. But he is surrounded by his wife, children, relatives and friends who are making his passage a community affair.


School continues to be a satisfying experience, especially now that we know the kids and vice versa. We are less intimidated by the tyranny of the textbook and venture into topics and activities of which the Ministry of Education would not approve or understand: coaching the kids to say “D’oh!” when they make a mistake, teaching them the “live long and prosper” hand sign, leading them in a few rounds of “A hundred bottles of beer on the wall,” and canceling instruction to show Michael Jackson videos. Malinda draws pictures on the white board to illustrate the textbook and Harvey sings tunes from “West Side Story.” We don't know if the kids are learning English, but we’re having a good time. 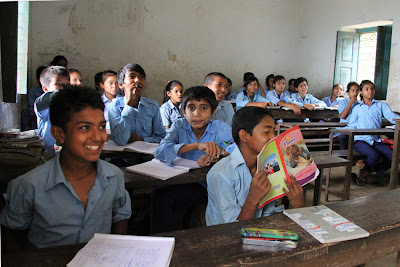 This is our second year with kids now in seventh and eighth grade, so we were able to get the school year off to a running start. But the sixth graders presented a new challenge to Harvey. It is a large class (29), with students ranging from 13 to 19. (The older students are girls who have been kept back multiple times over the years, and we suspect that failing is a strategy for avoiding house work, farm work, and marriage.) They were initially unruly, but Harvey now has them under control. The turning point, we think, was a class session in which we led them in multiple rousing renditions (group, solos, duets, boys-versus-girls competitions) of “Five Little Monkeys Jumping on the Bed.” It was a true bonding experience and Harvey wishes he had used it with clients. 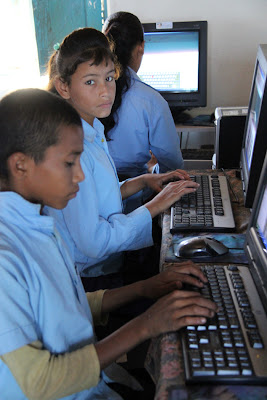 The computer class is turning out better than we had feared. The textbook is bizarre and we fail to see why sixth graders need to know about volatile and non-volatile memory, or why it makes sense to present four pages on storage devices and then to explain what storage is. But it is what is, so we rush through the text as quickly as we can and then turn the kids loose on the computers. They are learning to type in English and Nepali, they take it very seriously, and some have become quite proficient. After the break we will get them started on Word and Excel.
***** 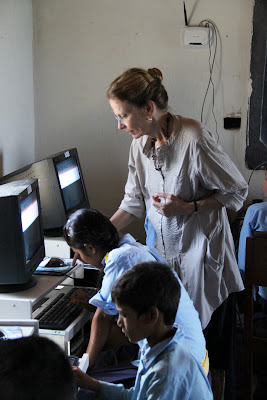 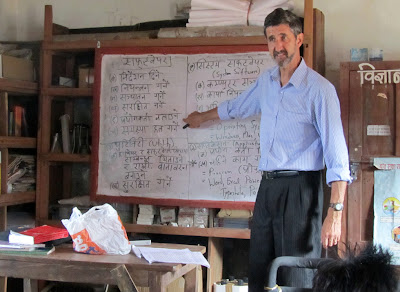 *****
The monsoon, as anyone who has lived through it can tell you, is a drag – hot, humid, muddy, and inconvenient, not to mention the leeches, spiders and other small wildlife. But it is also a beautiful and lush time of year and we are fortunate to be here. 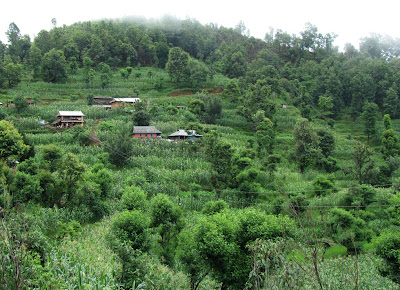 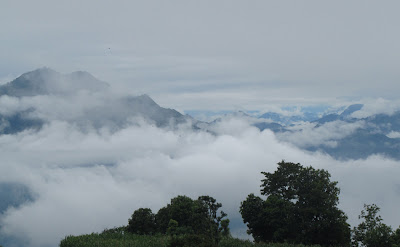 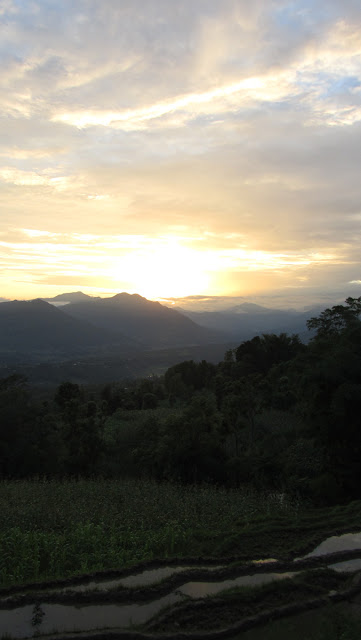 Posted by Malinda and Harvey Blustain at 7:03 AM