We are in the middle of the Dashain holiday, a time when the country shuts down, families get together, and the goat population takes a serious hit. A news report stated that 1.4 million people, over one quarter of the population of Kathmandu, left the city to join family in the countryside. 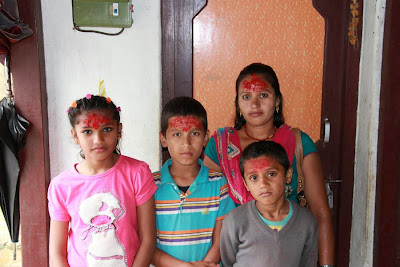 A good number of them have ended up here in Dharapani. For us it is wonderful  because Mira, Ashim, Sumana and Suman are back, and the compound is once again full of boisterous activity. Krishna, mit’s second son, arrived from Saudi Arabia after an absence of 18 months. Brihaspati is glad to have to him back, even though it is only for four weeks. 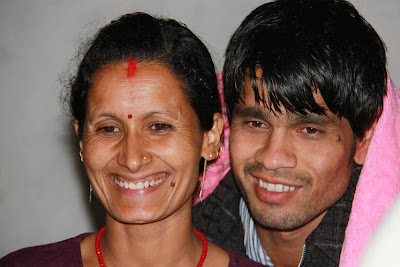 There has been a pall on this year's Dashain festivities. On Vijaya Dashami, the day when families exchange tikas, the remnants of Cyclone Phailin rolled in from India, hit the Himalayas, and stalled. We are in our third day (and counting) of torrential rains. Unlike last year, when our yard hosted scores of relatives, this year's rains kept people away. And that same morning, a young woman in Dharapani died. She had been living in Kathmandu, experienced a recurrence of cancer, and was brought home in July to die. Her death (especially on a Monday, an inauspicious day to die), combined with the storm, put a damper on the holiday. But our family did perform the important ritual of giving tikas, one of the highlights being the exchange between Harvey and his mit. 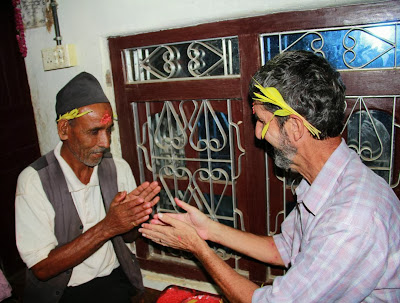 One of our projects has come to fruition. The nearest grain mill to Dharapani had been down the hill in lower Dumre - a long hike, especially if you are carrying a 50-kilo sack of rice on your back. For three or four years the Dharapani Women’s Association had been collecting dues to build a grain mill here, and despite the substantial funds they had collected it still would have taken them close to a decade to collect enough for a mill. So as a thank-you to the village for having been such wonderful hosts we decided to pitch in the needed funds. 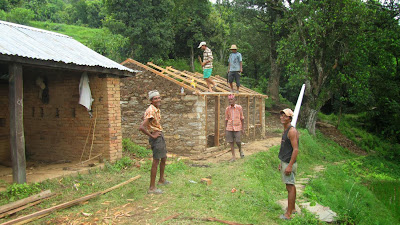 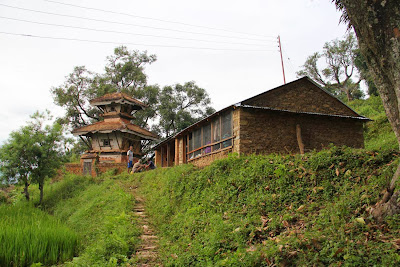 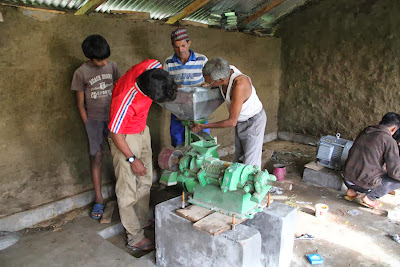 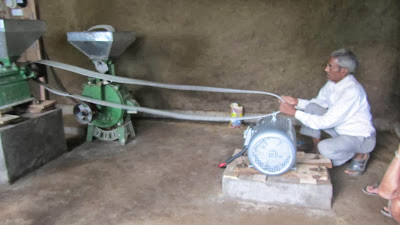 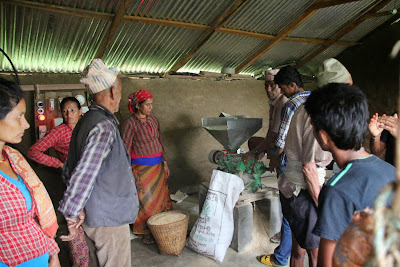 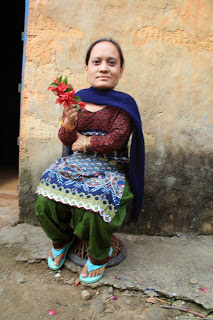 It was a collective effort. The women’s association provided the Rs 60,000 (about $600) in seed money. Every household in Dharapani paid Rs 1,000 for the labor to construct the building. Our mit served as general contractor, and he did his usual superb job of cajoling, haranguing, serving as the collection agency, and keeping everything and everyone on track. Samjhana Giri (left) and Brihaspati, the treasurer and vice chair of the association, were the guiding spirit, planners, and budgeters behind the project. 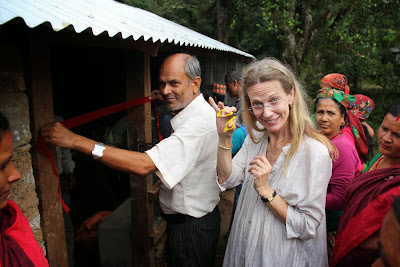 We had the easiest role of all – handing over a wad of cash, cutting the ribbon (done with grace and style by Malinda), and soaking in the praise when people told us (as they did constantly) that our “names will live forever” in Dharapani. We don't care much about living forever, but the mill way well prove to be the most satisfying and worthwhile thing we will have done here – or perhaps the second most, depending on the outcome of another project we will discuss in a future blog. 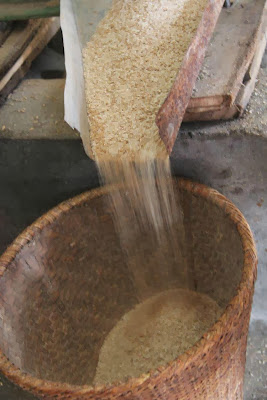 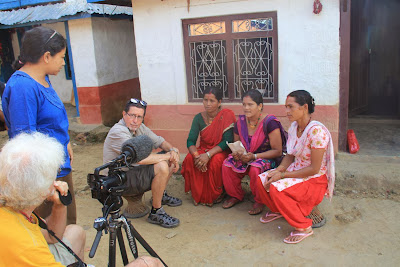 Last month we hosted George Basch, the founder of the Himalayan Stove Project, and three of his crew (see our March blog). They were in Dharapani both to distribute more stoves and to shoot video about the stove’s impact on the lives of villagers. People in Dharapani had never before served as film stars and extras and it is safe to say they will be talking about it for a long time. We had a wonderful time: we don't get many visitors, they were good company, and Malinda was celebrating the removal of her cast. 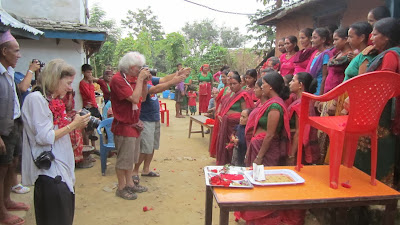 Most Nepalis cook inside the house over open fires that consume lots of firewood and produce unhealthy smoke. Indoor smoke is associated with bronchitis, lung cancer, TB, asthma, and a host of other ills, and the World Health Organization has estimated that 8,000 people in Nepal die each year because of indoor air pollution. The stoves are a wonderful piece of equipment that use less wood, vent the smoke, and create a healthier indoor environment. People love the stoves, they have an immediate impact on the quality of people’s lives, and the demand is insatiable. Please consider a contribution to the Himalayan Stove Project (www.himalayanstoveproject.org) and stipulate that you want the stoves to go to Gorkha. 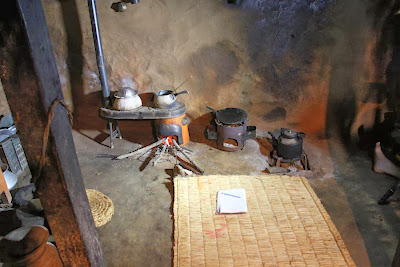 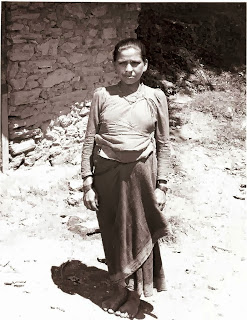 Death and its consequences have been on our minds, and not just because of the death on Dashain. In September, Lok Kumari Adhikari, the women who served as Harvey’s cook in the 1970s, died.  Her husband of 40+ years took it hard, and has gone to live with his son in Chitwan. One by one, Harvey’s links to the past are being snipped. 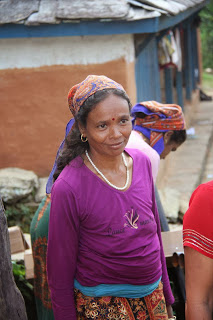 The husband of Sangita Pariyar (left), the woman who does our laundry, died as well. He had been ill for some time, and the immediate cause seems to have been complications from jaundice. We are getting a fresh perspective on how tough it is to be poor, low-caste, and widowed .

And then a young woman from Dharapani who had been living in Thantipokhari hanged herself. Married at 14, first child at 16, dead at 19. By one account, she is the fourth suicide by hanging in and around Dharapani in the past 15 years. They all had their stories, but common themes typically include a husband working overseas, domination by a harsh mother-in-law, endless days of hard work, the impossibility of divorce, and no other way out.
**** 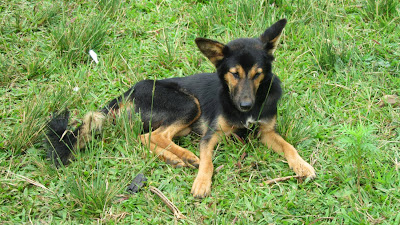 We have another death to report: Tommy the neighborhood dog. He showed up a few months ago and managed a living by making the rounds of nearby houses. But we think he liked us best because we petted him and treated him like, well, a dog. Last week Tommy disappeared, and the odds-on bet in the compound was that he was killed by a leopard. The theory was strengthened when Asmita found Tommy's much-eaten remains in a nearby field. RIP Tommy. 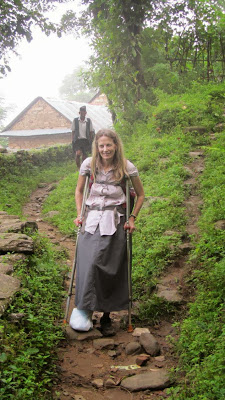 We’re not dead yet, but we have had signs of mortality that required treatment at the government hospital in Ampipal, about an hour's walk up the mountain. In August, Malinda slipped down the stairs and broke her foot. She was in a cast and house-bound for close to a month.  She is fully back to normal. Total cost for the exam, x-ray, cast, and rental of crutches: $30. Last April, Harvey had some weird growthy-bumpy thing on his leg which a biopsy showed to be benign. Total cost for the exam, surgery, biopsy, and follow-up: $24. We would not want brain surgery here, but for primary care, the cost, service, timeliness and lack of bureaucratic idiocy at Ampipal puts the American “advanced” health care system to shame.
﻿
﻿﻿

We are on a two-week break from school. Working six days a week is turning out to be less onerous than we had feared and we welcome the structure that it gives our lives. As we have written before, our reaction to the pedagogy and textbooks has run the course from disbelief to frustration, and has settled into resignation punctuated by fits of outrage. What makes it all rewarding are the kids. We enjoy warping their minds, to which end we recently taught the 8th-graders to “speak southern.” It is customary in Nepal for students to stand when the teacher enters the room and to say “Good morning, sir” or “Good morning, madam.” Our 8th graders now give us a rousing “Hi y’all!” and we love it when they greet us in the village with “Hi Hon!” and “Hi Sugar!” 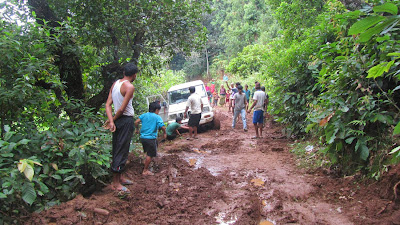 Prior the arrival of Phailin, we had thought the monsoon was over and were glad to see it go. The nights were cool, the roads were passable, and we could once again see the Himals lined up in the north like old friends. It will be that way again once this storm clears out. Life is good. 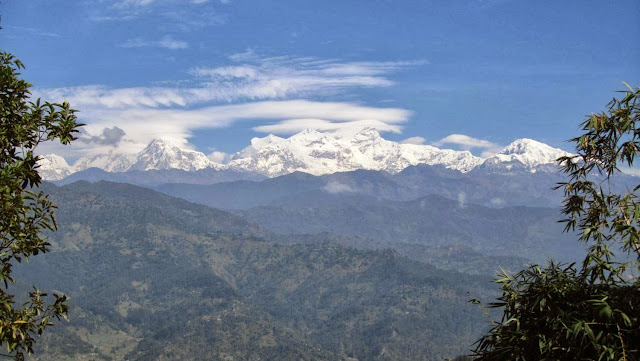 Posted by Malinda and Harvey Blustain at 8:45 PM