Doing What We Can

It has been more than a week since the earthquake, and people in Dharapani are still sleeping outside. Aftershocks, some severe, continue and people are afraid to live in their houses. A limited number of tents have been distributed, but contention for them was apparently pretty fierce. Our family did not get one and will have to buy one. But they have food and water. The hospital at Ampipal is damaged but functioning. Roads are once again passable. People are weeding corn and preparing for the start of the monsoon next month. Life goes on as best it can.

Overall, Dharapani fared pretty well. Areas to the north and east, especially around Barpak, the epicenter of the quake, are devastated. The villages are remote, landslides make for a dangerous journey, and helicopters are in short supply. 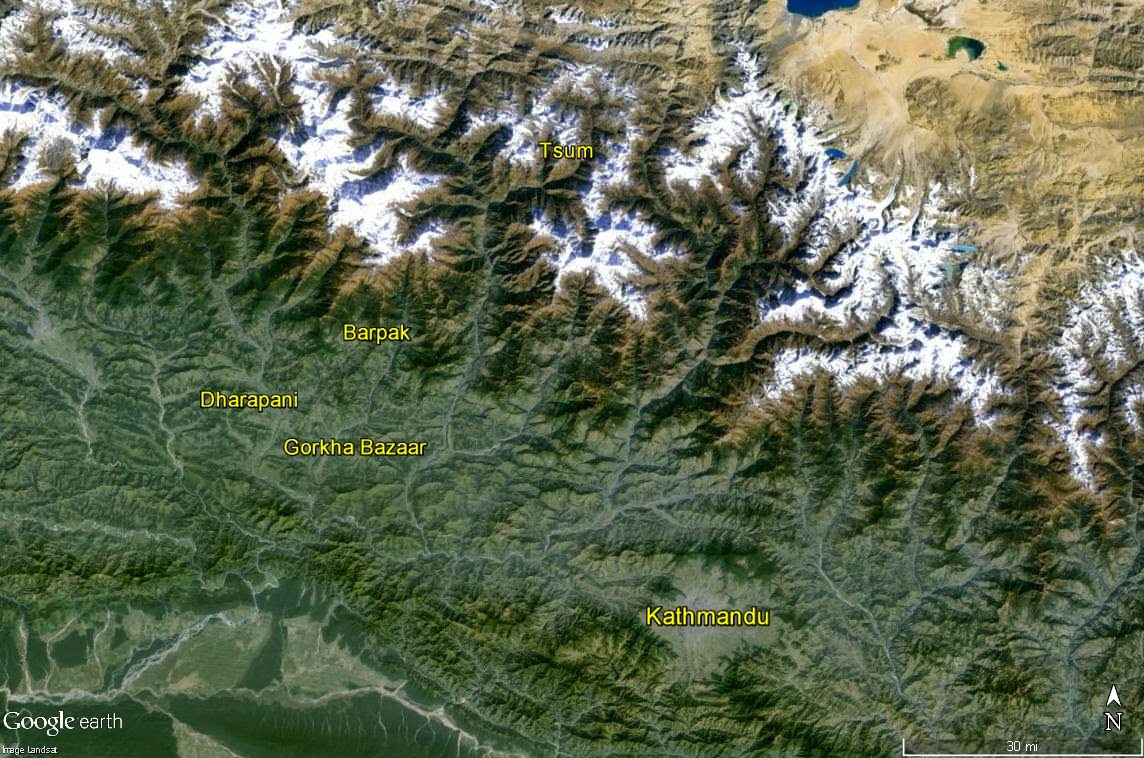 *****
Since 2011, we have been working closely with the Gorkha Foundation both here and in Nepal. GF, for example, provided the computers for our school and brought us the resources of the Himalayan Stove Project. It was under the aegis of the GF that we were doing the preservation project at Ligligkot. (Something tells us that project won’t fly right now.)

Since the earthquake, GF has been in full disaster relief mode. GF has established a logistics center in Gorkha, provides expertise on the area to other NGOs (including Mercy Corps and Doctors without Borders) and, most important, offers direct relief. 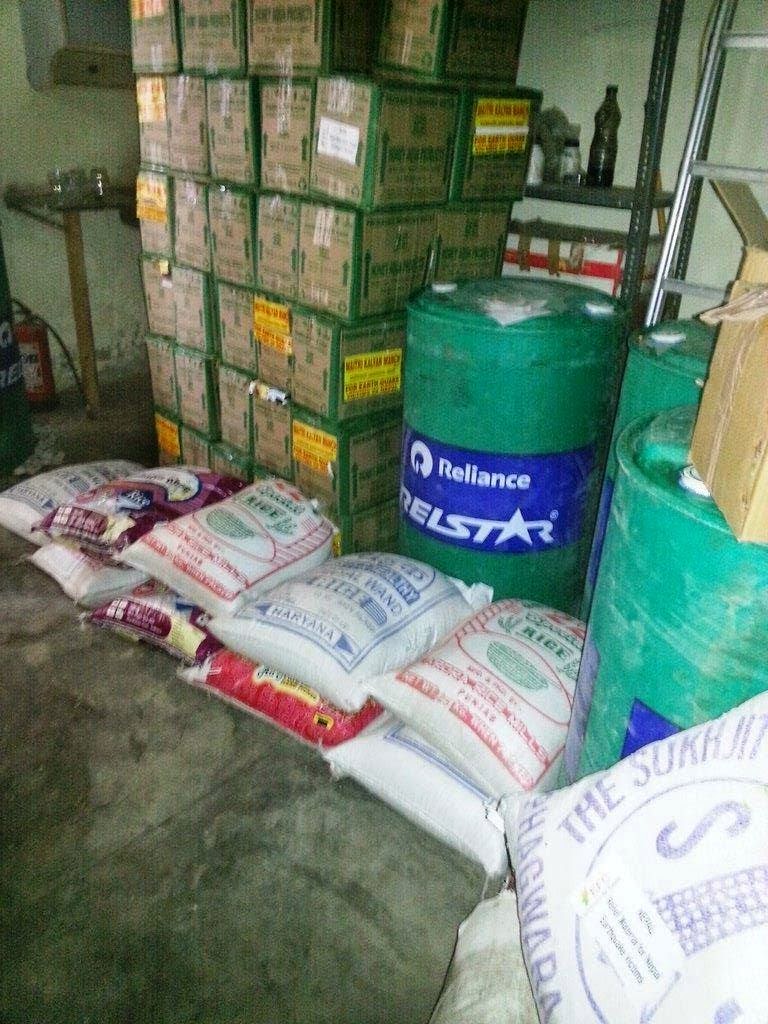 The most-needed relief items have been tarps, tents, and blankets. Through its extensive network in Nepal and India, GF found a supplier in India and, along with other supplies, sent a 21-foot truck on the two-day journey to Gorkha; a second truck will be shipped soon. 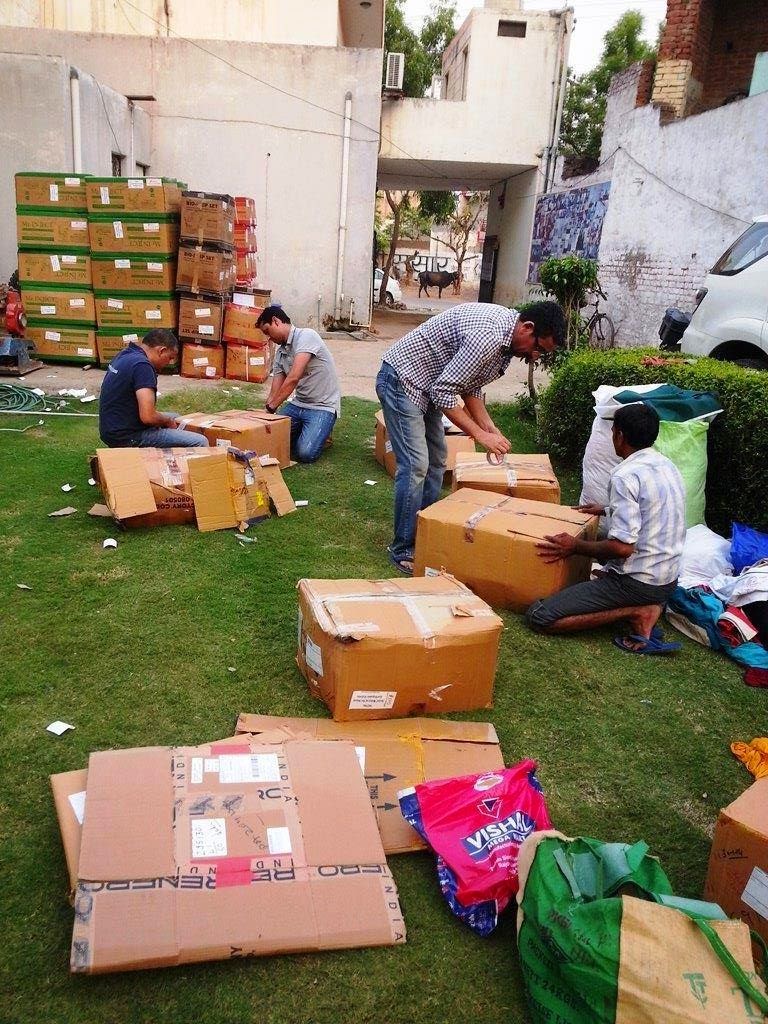 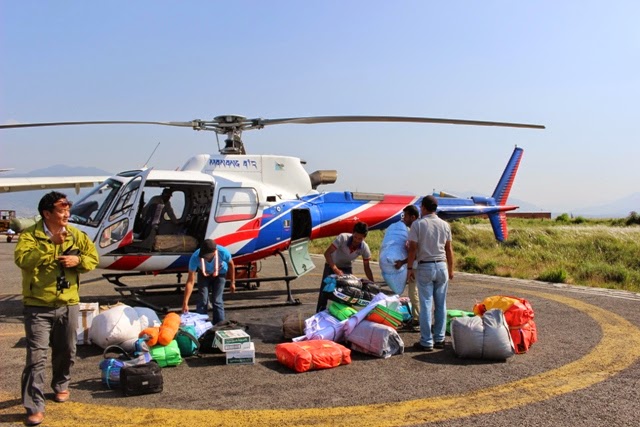 The remote Tsum Valley, four days from the nearest road head (see map) was flattened. GF secured a helicopter and is making relief flights to Tsum. The helicopter looks (and is) small, but anything larger would be unable to land in Tsum and bring out the wounded.

And here are the supplies after delivery at Tsum: 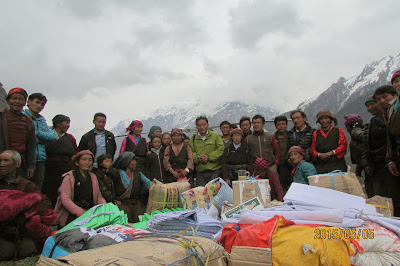 Bijaya (in the U.S.) and Salil (in Gorkha) Devkota have been remarkably tenacious and nimble in organizing these and other relief efforts.  We are proud to serve on the board of the Foundation.
***** 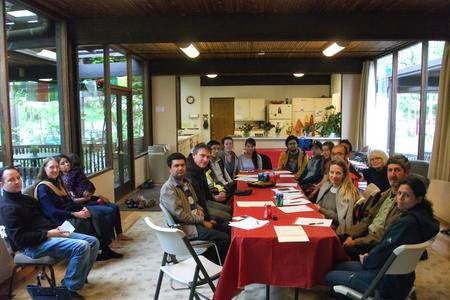 Here in Eugene, the disaster brought local Nepalis and friends of Nepal together. We have gotten very active in the Eugene-Kathmandu Sister City Association. To date we have collectively raised $17,000 (and counting). The Nepalese government has been inept at best, and some of the larger NGOs don’t have needed local expertise. Because many of the EKSCA members have wide networks in Nepal, we know which local organizations are doing a good job, on the ground, now. Those are the groups we are funding.

EKSCA is sending $5,000 to the Gorkha Foundation. Another $5,000 is going to the American Nepal Medical Foundation, an association of mostly American-trained Nepalese doctors. They have sent teams out to hard-hit Kavre, Nuwakot, Dholakha, and Sindhupalchowk districts. Both GF and ANMF are volunteer organizations with all donations going directly to relief.

The third $5,000 allocation will go toward water purification and treatment, although we are not yet sure how or to whom. On Thursday, Dr. Binaya Rimal, a Nepalese physician in Eugene travels to Kathmandu to work in a trauma ICU and then go out to Sindhupalchok. While in Nepal, he will talk to people who are active in water treatment and will then recommend where the funds should go.

The city of Eugene will send $50,000 for Nepal relief (thank you!) and EKSCA expects to be involved in decisions of where the money goes. We are continuing to seek out effective groups doing good work and will support them as long as we have money. If you would like to help, EKSCA has a web site (www.kathmandurelief.org) to collect donations. The site has been described as “very Eugene,” but don’t let that put you off. The need, now and in the future, is great.
***** 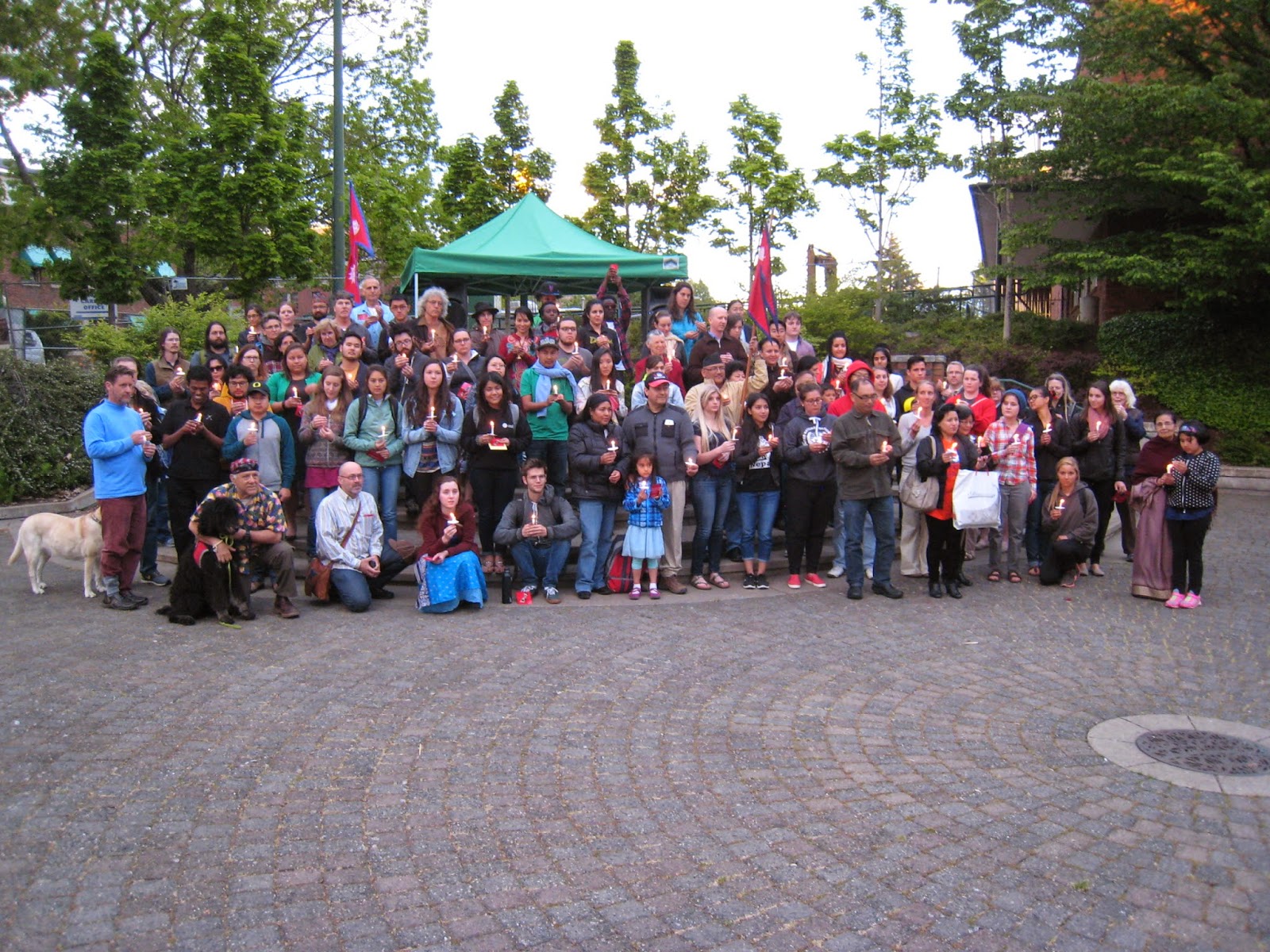 Last night Nepalese students at the University of Oregon held a vigil for Nepal on campus. Over 100 people came, lit candles, and heard from Nepalis and Americans about how the earthquake has affected them. 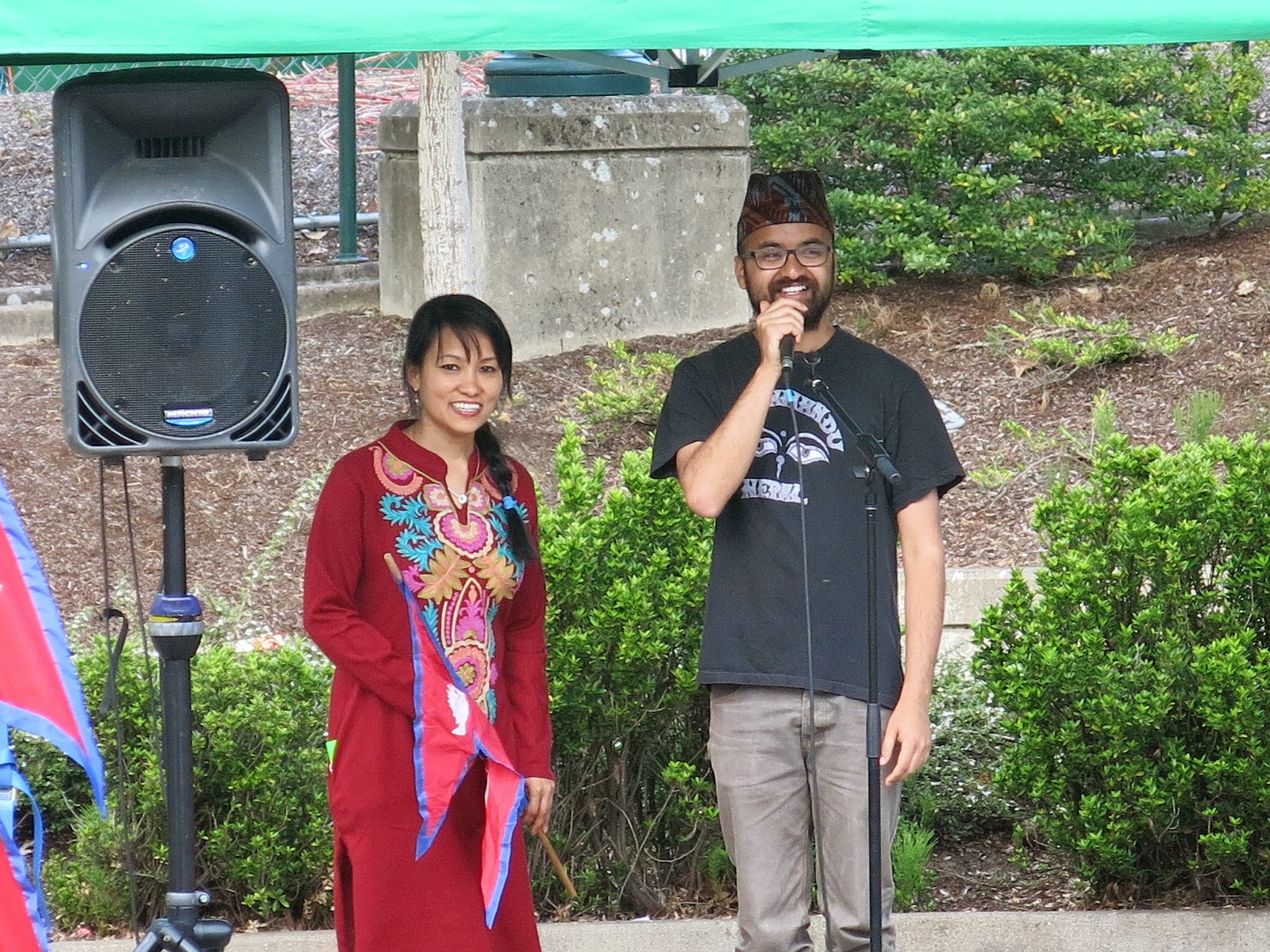 Students Anjani Lama and Sugam Singh did an extraordinary job in pulling it together. 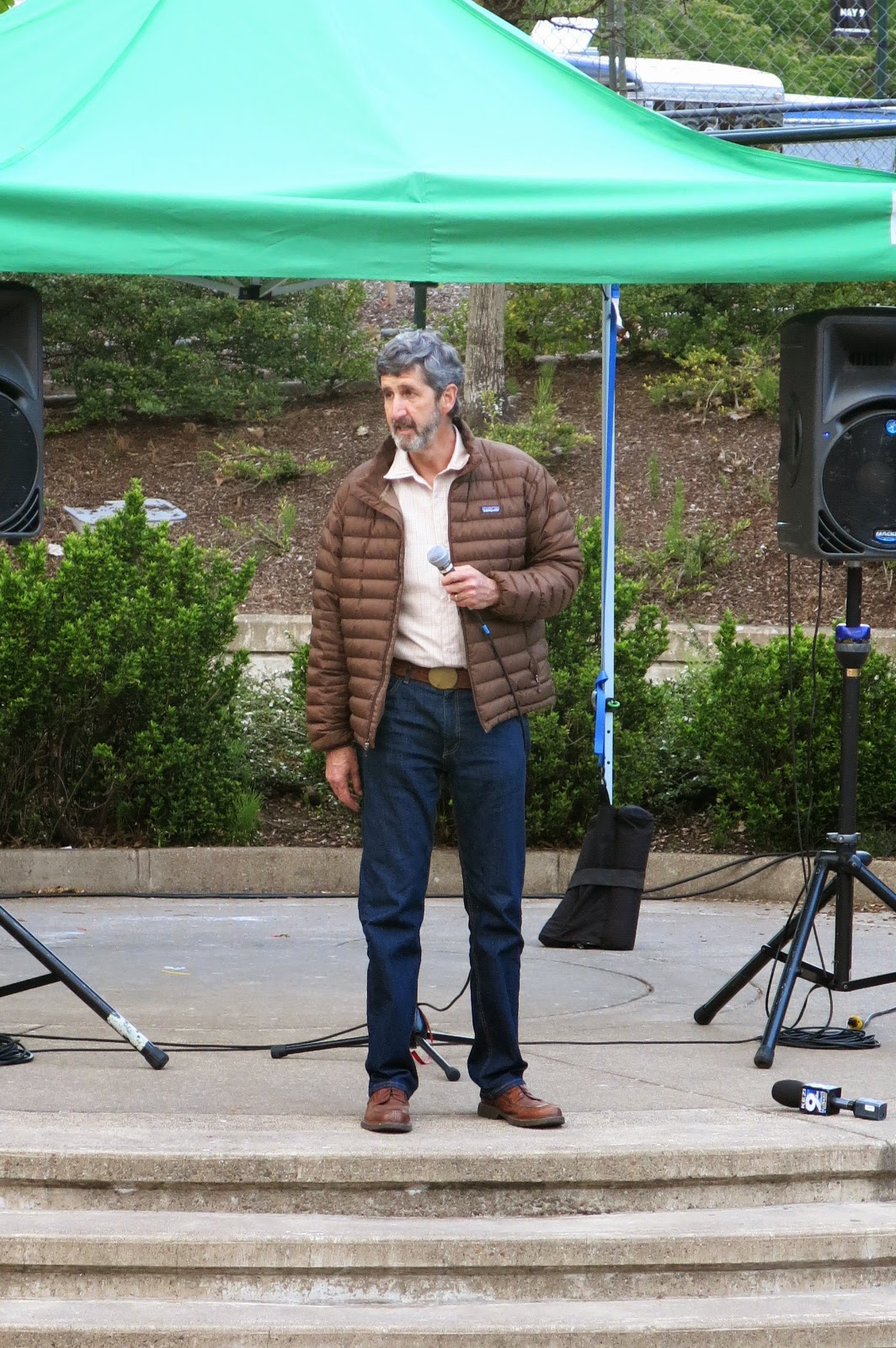 Harvey spoke on behalf of the EKSCA, emphasizing the good news that Nepalis are coming together and finding their own solutions despite government inaction, corruption, and other obstacles. We really do believe that this disaster can bring about a better Nepal.
*****
We have been mostly focused on Nepal for the past week, and expect to be for a while. But we need to pull back a bit. We bought a house, move next week, and have not yet begun to pack up. We will get it done, even if we have to suspend our evening binge-watching of "Trailer Park Boys."

Like everyone else closely connected with Nepal, we are heart-broken about what is happening there. But we also feel fortunate that we are here and able to help in a modest way.

Posted by Malinda and Harvey Blustain at 7:45 PM